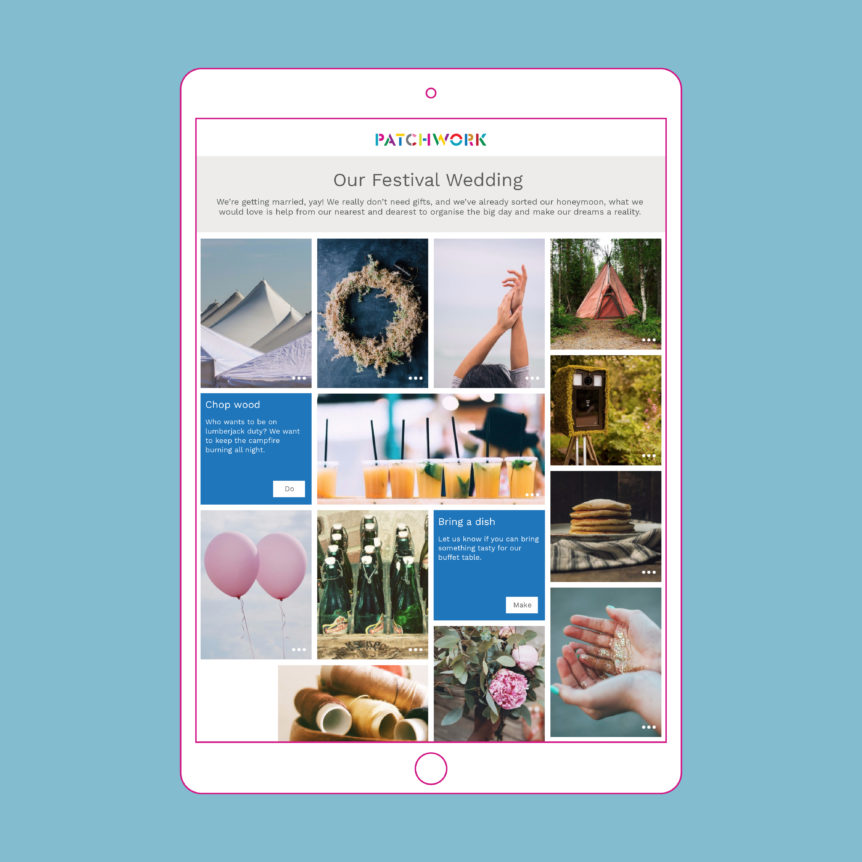 You’ve heard of crowdfunding, and you’ve heard of weddings, but have you thought about crowdfunding your wedding? Our users have been creating patchworks to help crowdfund their weddings for a while now – an idea we love, incidentally, because why wouldn’t we? It’s about sharing and creating and being together, and that’s what we’re all about. Recently some of the big guys have picked up on it too – people like The Telegraph and Grazia, who we’re so glad are raising awareness for these super important issues. Want to know more? Read on…

What is a crowdfunded wedding?

A crowdfunded wedding is where you ask your guests to contribute things to the day, in lieu of a present in the traditional sense. This can be money, which is what most people would think of when they were told the wedding was being crowdfunded, but it can also be asking people to ‘make’ and ‘do’ things too. This means people can make their contribution by putting some money behind the bar, making a cake for the dessert table or offering a slot on the night to do a DJ set.

Why would you have a crowdfunded wedding?

How can you have a crowdfunded wedding?

Unlike straight up crowdfunding platforms where you’re asking strangers to give you money for something, the Patchwork platform is private, and much more personal. It’s designed to help coordinate the friends and family who love and support you. Patchwork takes away the awkwardness of asking for money straight up, because putting your bank details on your invite can feel a little icky. Instead, it’s a much more personal, meaningful and fun experience for everyone involved: you can invite guests to help you in a number of ways. Because you can explain the difference each thing would make to your life, they can choose whether they want their gift to be money, time or their skills; the outcome’s still the same, but there’s less awkwardness and more intentional, resourceful, creative gift giving. Everyone’s a winner!

To start your own on Patchwork, you can either customise one of our wedding templates, or start one from scratch. We can’t wait to see what you put on yours!

Patchwork lets people get together to contribute cash, time and skills. So whether you’re planning a wedding, organising a birthday gift or throwing a party, invite friends to help make it happen.

Looking for inspiration, ideas and advice? Welcome to the Patchwork Blog. Your new happy place.